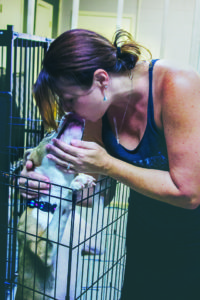 When you see someone fully embracing their passion—and growing in it—BOOM! It’s pretty darn inspiring, right? Kelly Kinlaw of Fur Sisters has been dedicated to saving dogs from high-kill shelters for many years and always wanted to be able to do more. Save more. Last July, Kelly realized her dream when Fur Sisters opened a 750 square-foot transitional space for dogs coming from urgent situations. In this space, dogs can decompress while waiting for a foster or adopter. This time allowed to transition is so important, because dogs are often too stressed in shelters to show their true personality and they get overlooked time after time. In the week or so that dogs stay at Fur Sisters, they can relax in this calm space while listening to music, enjoying some aromatherapy, and getting lots of treats. They are also tested with cats and other dogs during this time to see what kind of home would be best for them.

Fur Sisters mainly pulls from Putnam, Bradford and Clay county shelters, as these shelters are constantly overcrowded and, unfortunately, euthanize for space. They’ve also taken in some sweet pups from emergency situations, like Norman, who was thrown out of a moving car on Normandy Boulevard, and Angel, who was found in a Walmart Parking lot, completely starved, and the bottom half of her stained yellow and brown—you can figure out from what. You may also have seen Fur Sisters on the news when they helped Louis, a homeless man living in the woods taking care of a pack of dogs. Louis was taking as best of care as he could of the dogs he loved—they were being treated better than he treated himself. Fur Sisters stepped in to help the dogs and are also continuing to help Louis. 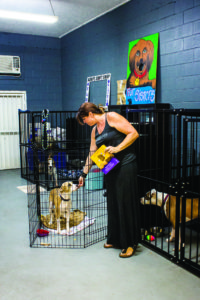 Here’s some exciting news for those of you who are looking for a great hair cut and want to meet some dogs at the same time! Kelly has moved her “day job” to be in the same building, so that she can be more efficient in both her rescue work and her making-people-look-gorgeous work. Cuts by Kelly moved to the front of the Fur Sisters space in Jax Beach in September of 2017. Go get your human hairs cut!

The new Fur Sisters location is a fantastic asset to our beach community. If you’d like to become involved (and become a “Fur Angel,” as helpers call themselves), Kelly says they’re always looking for people to help walk and socialize dogs, especially on the weekends. You could take a dog for a beach romp! They also always have a need for chew bones, dry dog food, monetary donations, and fosters—most crucial to save more lives!

Donation items can be dropped off Tuesday through Friday 10-4 or email fureverursrescue@gmail.com to coordinate a time, offer volunteer time, or set an appointment to meet some amazing pups!

Fur sisters currently has several dogs they’ve pulled from high-kill shelters in boarding and the bills are piling up. Kindly Donate to Fur Sisters on #GivingTuesday or offer to foster!

I first met Pat Delaney at her vet’s office as we were distributing an issue of Unleash Jacksonville. “My dog, Scarlet was in that magazine,” she proudly told us.“Well, before she was MY dog!” And then Pat went on to explain how this skinny, scared, almost-euthanized mama Pit bull came into her life, and the story is absolutely fantastic. We just had to share.

If you were the judging-by-the-book-by-its-cover type (which you’re obviously not) you’d never in a million years see Pat Delaney as a woman who’d have a passion for the vilified Pit bull breed. But, joke’s on you! Pat has been rescuing female pit bull puppies for the past 35 years, and she has nothing but brilliant things to say about them. Her husband was a Navy pilot and deployed many times, “I needed to feel safe in my home with three little girls. Our first was Maggi, a black and white Pit bull puppy, who we rescued at 5 weeks old. She moved many times with us and was even the Commanding Officer’s dog at NAS Jacksonville for a time! She brought us such joy for 11 years. We went on to rescue Darcy, a black fawn Pit Bull, who was with us for 12 years, and then Lily, a chocolate-and-white Pit bull. Lily brought our family years of cheerful and devoted companionship. After losing my husband of 46 years to lung cancer two years ago, then last November, my Lily passed away from liver cancer, I was shattered. I was done and never wanted to be devastated again. The house was empty. And I didn’t plan on getting another dog.”

At 6 years old, Scarlet was dumped in a high-kill shelter in Orange County—underweight and pregnant. She was gentle and approachable … until she delivered her babies. Under the stress of being in the shelter, and also being a new mom, she became very protective of her babies. She didn’t want anyone to get near them. Any human mother can probably understand Scarlet’s mind set, but she was labeled as aggressive and placed in isolation. She was given a couple of days “deadline” to secure a rescue or else be euthanized, along with her babies.

Poochie’s Pet Rescue worked hard to make a miracle happen. They scrambled to find a foster for Scarlet and her puppies—and did so within just hours of them being killed. “Scarlet and her puppies were fostered by my daughter Kelly’s new neighbor,” recalls Pat. They were there for several months and Scarlet was able to relax and enjoy being a mom. Kelly fell in love with a sweet dog that needed a second chance after being bred so many times.”

When they were old enough, Scarlet’s puppies went to their forever homes, but no one came for Scarlet.

“Kelly begged me to take her for a few days. My brain didn’t want another dog, but apparently, my heart did. I took Scarlet on a trial basis and she never left. I really didn’t comprehend how much I needed her, or how much she needed me.”

If you’ve ever been curious what pure and unconditional love looks like, I’d invite you to spend some time with Scarlet and Pat. During our photoshoot for this story, the thing that stood out most was the beautiful bond these two amazing ladies share. They do everything together.

“Scarlet is now my constant companion. She’ll get to be the puppy for the rest of her life instead of having puppies. All she has to do now is eat and play and be loved. Scarlet is so happy all the time, from her morning walk, to sleeping on the couch to exploring her half-acre yard through her own door. She brings me so much joy and makes me smile continuously.”

It’s clear that’s all Scarlet wants for Pat as well, after the losses she’s endured. Scarlet is filling up Pat’s formerly empty house with her huge smile and her open heart.

As a long-time Pit bull advocate, Pat would like people to know several things about the breed in general. “Pit bulls are so special! They bring such amazing love and companionship. They’re very loyal, powerful, and devoted. They are majestic animals that display their strength and grace with their every move. Pit bulls are incredibly intelligent, sensitive, and aware of their surroundings. They bond and are protective of their family.”

The smile on her adorable face says it all, Scarlet is safe and she is home—she has truly found her angel. But, according to Pat, “I didn’t rescue her—she rescued me.”