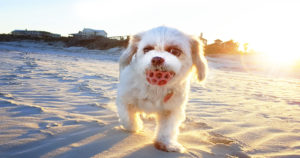 We’ve all heard the story about the person walking down the beach, purposely throwing starfish back into the water. “It matters to that one!” In our lives, we each have times to ask ourselves, is this my starfish? For me this story became reality one December evening many years ago with a dog named SuzieQ.

Her story is much like a starfish being tossed across ocean waves as it moves toward the beach until thrown on shore through no fault of its own. For Suzie it started far before we knew of her landing on Animal Control’s euthanasia list immediately following the minimum stray hold. On the outside she had a scar from a previous C section, was fearful and was a biter triggered by touch. On the inside she was complex and broken, her true self only to be revealed with time and compassion. A small rescue stepped forward for her.

I met her after she had been at the rescue for a while. Volunteers passed her by intimidated by her wild display known as barrier frustration. When it was my turn, I held out the leash in peace offering for her one chance to get outside. As I slowly opened the crate door, she walked right into the slip lead.

Over the next nine months, my dog and I showed her a great deal about the world and her place in it. Until one afternoon when a group of dogs turned on her leaving her scarred physically and emotionally. Then a few days later her rear became paralyzed. No longer able to walk she regressed to a point of feeling threatened by everyone and everything. Yet, fate was not finished with her. I was at AVS for my own dog when the surgeon offered to examine her after hearing her story. The diagnosis, a slipped disc pushing on her spinal cord. He said most likely it had been slipping for a long time which explained her biting behavior when being picked up. The attack was the traumatic final blow to that disc. IVDD or Intervertebral Disc Disease. SuzieQ had a successful surgery, less than a year of rehab her back recovered leaving little residual nerve damage. The surgeon gave me caution it was probably the worst case he had seen and she probably would not survive another surgery. With the absence of pain for the first time in a long time, she was a like a puppy playing and chasing her ball. Her behavior improved some but the lasting effects of her trauma remained. I adopted her on August 1, 2014 as we celebrated her 5th birthday and adoption together.

Life with SuzieQ is always filled with twists and turns. 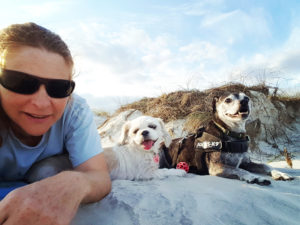 She was a dog wanting to live like any other dog but with more baggage then any being should have to carry. She is small but fierce, with a bold, independent, adorable personality that had gotten her through the toughest experiences of her life.Once labeled “unadoptable,” over the years she has enjoyed all the good things in life. She has a safe, comfortable home with healthy foods, affection and enrichment. She loves going on car rides and our adventures around town. She learned to feel comfortable around people, even kids. We have been through phases of medications and treatments for her behavior and her back. Physical therapy, acupuncture, laser therapy, Reiki, EMDR, salt cave, music therapy, essential oils and even a pet communicator. Some experiences in her early years were revealed and she has had many traumas leading to her PTSD behaviors.

Fast forward several years to Fall 2018 when she was diagnosed with a pinched nerve in her lower back. Life may be different now for her but the trauma from her back injury is still very real for her. Monthly acupuncture and laser therapy minimize progression of that pinched nerve and keep her comfortable. These treatments have become necessary to keep her moving and with the goal of preventing another slipped disc. This past year she was diagnosed with a heart condition possibly as a result of ongoing hypertension. We recently started Reiki sessions with Jade Paws, and it has become a greatest resource in addressing her past traumas.

I am still the only person she allows to touch and handle her. I can pick her up, give her a bath, even put on a muzzle. The one lasting challenge we have is in grooming. Her fear of the tools and being hurt again far outweigh any grooming benefits. These years of experience with her, and other misunderstood rescued dogs, has drawn me into the life of dog behavior and rehabilitation. She has led me down a path to studying positive and partnership training methods and teaching dog’s necessary life skills to fit into our world. I find alternative therapies and positive approaches to training outperform conventional methods. SuzieQ did not have to experience all her trauma. Of the traumas we know of, they were a result of human error in the fo 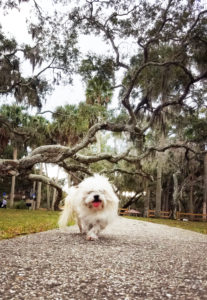 rm of lack of knowledge or access to providing appropriate vet care, a safe environment, and even basic knowledge of dog behaviors.

And now we’re here in the midst of a world crisis that has brought our medical and veterinary facilities to limiting patient services to curbside and drop offs. We cast aside the special needs of dogs like SuzieQ who once again do not conform into the mass molds. What happens to them? For SuzieQ, we’re fortunate to have places like the Saint Francis Animal Hospital which continues to keep the needs of the individual animals as their priority. For SuzieQ and me, this is not a new reality. For even specialists have refused her necessary care. My dog has PTSD and will not allow anyone near her without me handling her. This is her choice, her safety net, after all she has survived and grown through. And is she worth it? To be tossed another chance? To encourage us to perceive differently? When they ask her, I can see in her eyes and heart she is saying back, “Are you?” Maybe we need to put our egos aside more often and ask ourselves, are we worthy of their trust?

So, when is a dog a starfish?
When one is at your feet washed up on the shore of possibility. Be open, be mindful, and most importantly, listen. If you watch quietly with an open heart, they will tell you, “I am meant for more.” •