/ Published in The NEW Issue Written by Jerr Blinkster 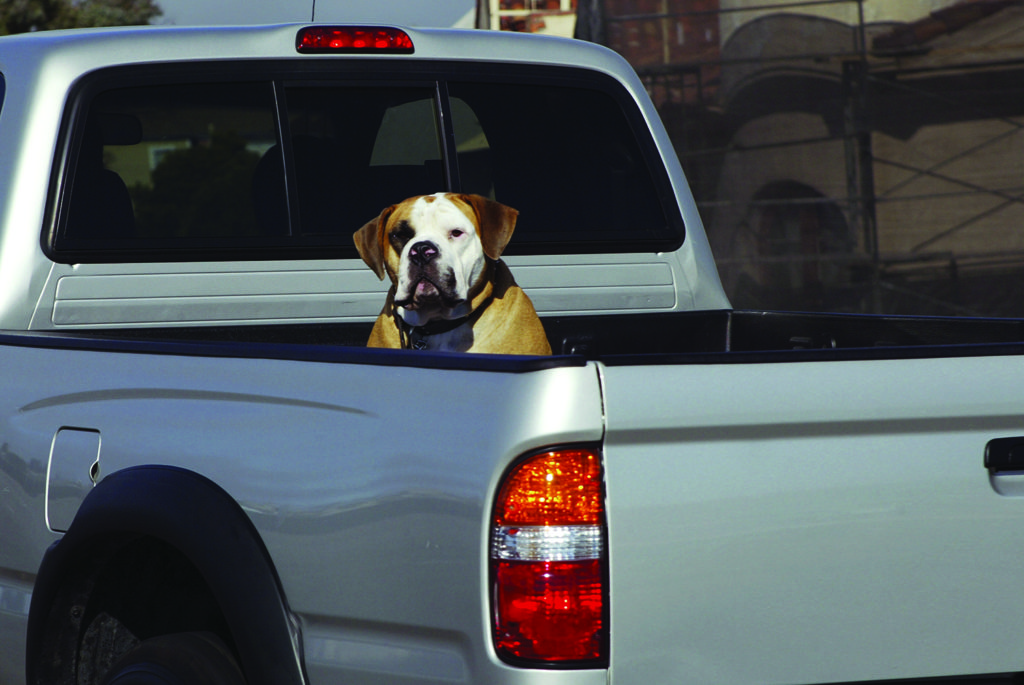 Buster is my BOY! He’s my sidekick—he goes everywhere with me. It’s always been just easier for Buster to jump into the back of the truck when we go places. It’s cleaner, too. I don’t want dog hair in my purty F150. He always did whine a bit, because he wanted to be with me in the cab, but he also loves the wind in his jowls.

But, listen guys, I was driving over the intercoastal a couple weeks back behind a truck with a dog in the bed and I saw something I can’t unsee—I’m a big hairy man and it made me ball like a baby. The truck had to swerve suddenly and the black lab skittered across the truck bed, over the side and onto the bridge. The truck wasn’t even going to stop because the driver didn’t realize they’d just unwittingly killed their dog. After I saw that, I did a little research and learned something staggering—according to the American Veterinary Medical Association, it’s estimated that around 100,000 dogs every year are fatally injured by jumping or falling from a pickup truck’s cargo area. Yikes man. Buster could become startled, see something tempting, like a squirrel or a hamburger, and jump out of my truck! He could be injured by the fall or struck by oncoming vehicles (and potentially cause an accident and injuries to other drivers). I thought about just tethering him with a leash, but according to the American Humane Society, many dogs have been strangled when tossed or bumped over the side of the truck and been left helplessly dangling.

Here’s another concern of mine, living in Florida—the galldang heat! The floor of a truck bed can become VERY hot, I’ve seen Buster dancing around back there, but figured his paws were like shoes. They’re NOT! He could get horribly burned and we’d have to take him to the emergency room. I’d feel like a real bad dad. I can’t stand to see Buster in pain.

One last reason that I’m resolving to keep Buster in the cab with me from now on—as if I needed another—I have a lead foot. That’s right. I like to drive real fast. A truck traveling at high rates of speed can kick up small pebbles and other road debris, which could strike my boy, Buster. He could lose one of his big brown eyes or worse. That would just about kill me.

Buster is a dog, but he’s also my best sidekick. The last thing I want is to see is him hurt just because I didn’t want a little dirt in my sweet F150. You got a truck, too? Save everyone a bit of heartbreak and make this resolution with me. •

One thought on “RESOLUTION: No more Riding in the Back!”